Scorpion primers are a class of DNA single-stranded oligonucleotides established by Whitcombe et al. in 1999. It's generally believed that Scorpion primers adopt a unimolecular probing mechanism, which is different from other dual-labeled probes with biomolecular mechanisms such as Molecular Beacons and TaqMan probes. Together with their excellent properties, Scorpion probes can be used in multiple different fields, such as real-time PCR, endpoint PCR, SNP detection and gene quantification.

Figure 1 shows the detailed probing mechanism of a typical Scorpion primer. Like other dual-labeled probes, the common parts include a probe sequence held in a hairpin-loop structure and a self-complementary stem structure with a fluorophore at 5'-end quenched by a moiety in the vicinity of the 3'-end. Notably, the quencher is linked to a primer via a PCR blocker that can prevent read-through. The process could be divided into five steps: (a) initial denature by heating, when the primer is ready to bind target; (b) annealing of primer to target; (c) PCR extension from the primer; (d) the second cycle of denaturation and annealing, generating a new single-strand target molecule with the primer attached; and (e) the intramolecular binding between the loop region and the target, allowing fluorescence emitted. 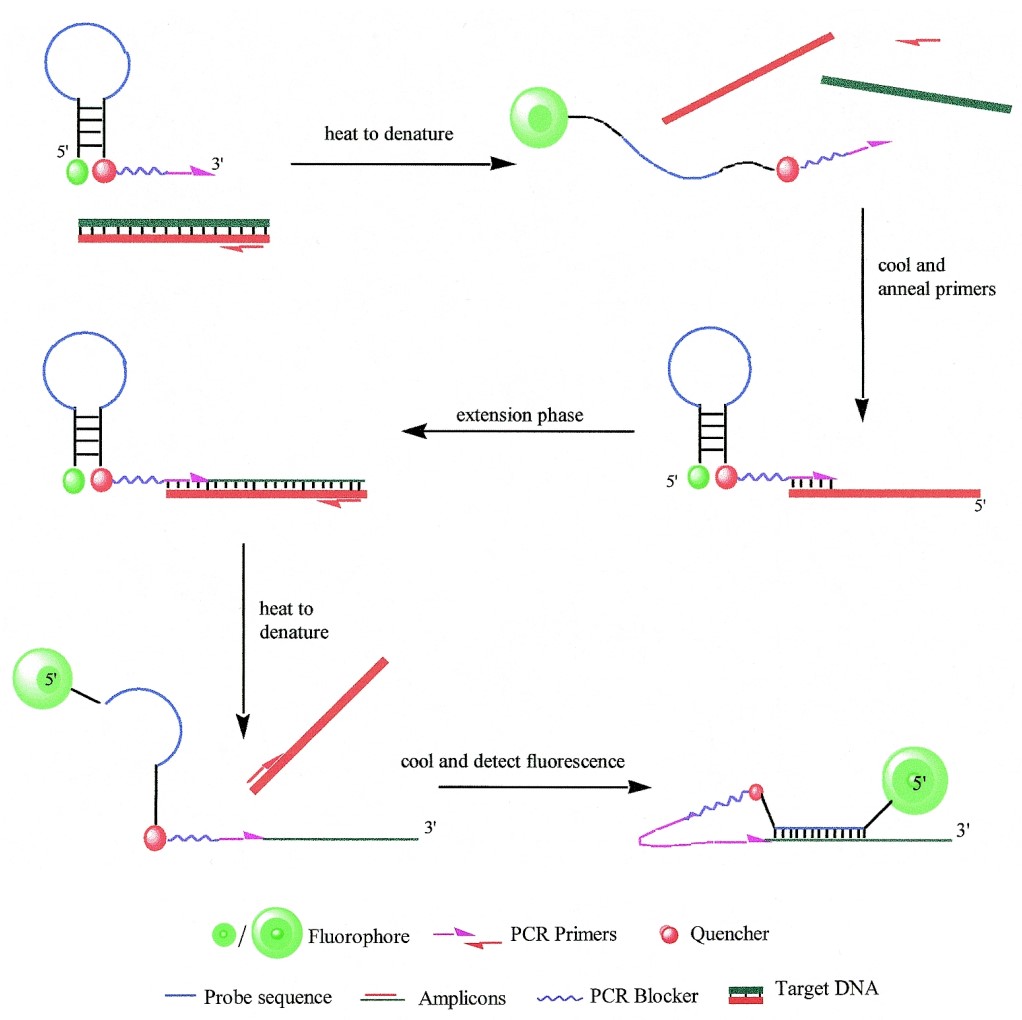 Based on its working mechanism, the generated undesired hybrids during the process are less stable than the reformed stem region. Besides, the blocker can efficiently reduce non-specific PCR products like primer dimer or mispriming events. Consequently, the signal can only be detected when the probe sequence within Scorpion primer perfectly hybridizes to target sequence. Scorpion primers are more efficient compared with Molecular Beacons and TaqMan probes and selective and sensitive enough for detecting single base mutations. Therefore, Scorpion primers can serve as a quite useful tool for biochemical detections.

All the bio-synthetic Scorpion primers are available, the corresponding parameters are listed below: