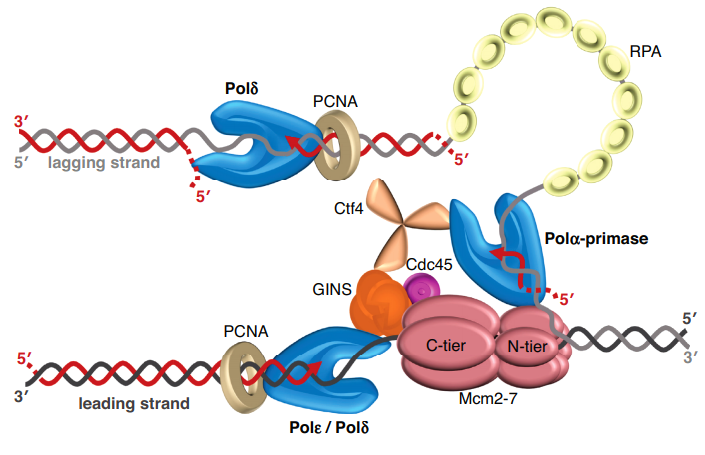 DNA polymerases have a highly conserved structure, which means that their overall catalytic subunits vary little among different species, and irrelevant to domain structure. Conservative structures usually indicate the important and irreplaceable functions of cells, and their maintenance provides evolutionary advantages. Its shape can be described as similar to the thumb, finger, and palm areas of right hand. Palm domain seems to play a role in the transfer of phosphoryl groups in the catalytic reaction of phosphoryl transfer. When the enzyme is active, the DNA binds to the palm. The function of the finger domain is to combine nucleoside triphosphate with template library. Thumb domain plays a potential role in DNA synthesis, transport and localization. 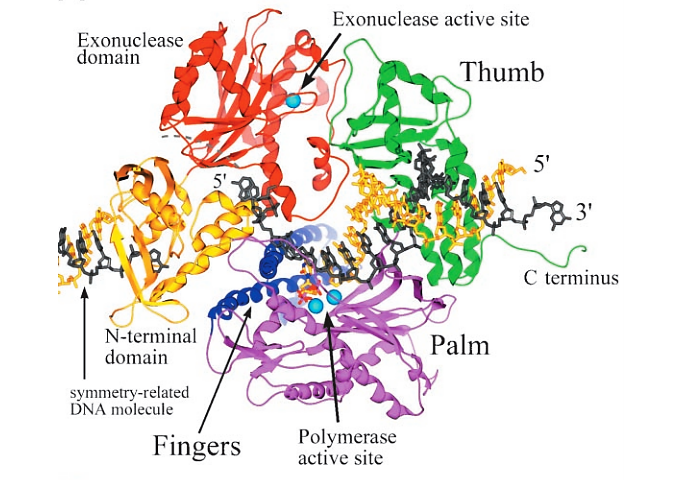 The main function of DNA polymerase is to synthesize DNA from deoxyribonucleotide (a component of DNA). Its functions can be summed up as following. 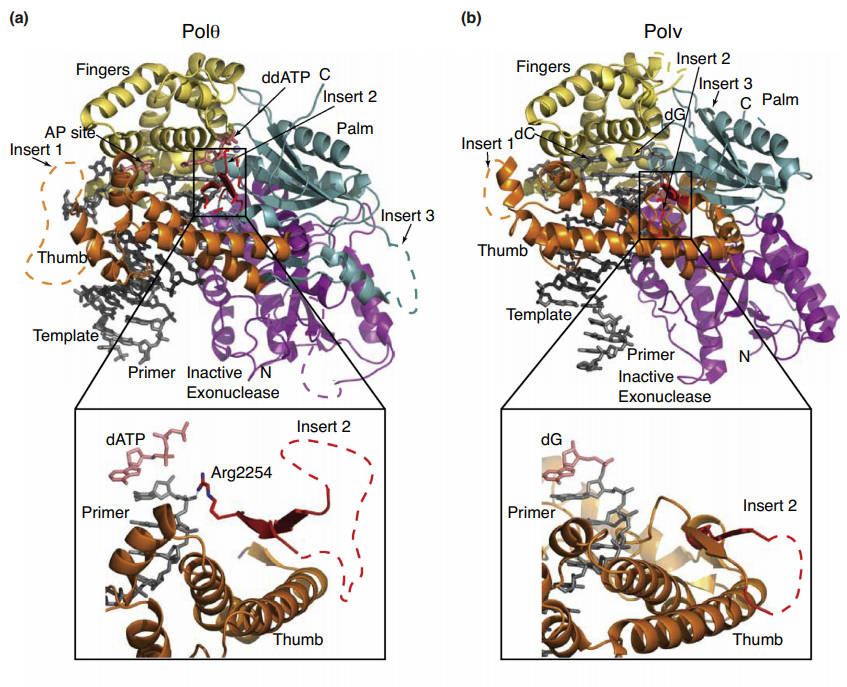 Fig. 3. Human template-dependent DNA polymerases. aRapid identification of several of these DNA polymerases in a short time resulted in some confusion in nomenclature that is worth mentioning briefly. The product of the human DINB1 gene was first named Pol θ, but because that designation had already been used, the human DINB1 gene product is now designated as Pol κ. When first identified, DNA polymerase λ was found to be homologous to Pol β, so that in one instance it was designated as Pol β2, but now it has its own Greek letter designation. The S. cerevisiae X-family enzyme encoded by the POL4 gene was first considered to be the yeast equivalent of mammalian Pol β, but is now known to be more closely related to mammalian Pol λ. Finally, the products of the yeast TRF4 and human TRF4-1 genes were originally designated Pol κ. Because that name was already assigned to a different gene product, the TRF4 gene products are now called Pol σ. (Jain R, et al, 2018)

Structures of the catalytic cores of Polθ and, Polν. The proteins are shown in cartoon representation and the template–primer DNA duplexes are shown as gray sticks. (a) Polu (4X0P) and (b) Poln (4XVK) consist of the inactive exonuclease (purple), palm (cyan), fingers(yellow) and thumb (orange) domains. The nascent base pairs, formed by a template base with an incoming dNTP (in the ternary complexes of Polu) or with a primer base (in the binary complex of Poln) are shown in pink. The B-site Ca2+ ion (chelated by the phosphate groups of the incoming dNTP) is shown as a light blue sphere. Dashed lines depict unstructured regions. Insert 2 in the thumb domains of Polu (60 amino acid long) and Poln (15 amino acid long) is colored red and shown in a close up view panel under the overall structures of the proteins. Arg2254 of Polu’s insert 2 forms a hydrogen bond with an oxygen atom of the phosphate group of the 30-terminal primer base.