A primer is a small piece of single-stranded DNA or RNA that serves as a starting point for DNA replication. At the beginning of nucleotide polymerization, it is linked to the reactants in the form of covalent bonds. Primers are usually two-segment oligonucleotide sequences that are artificially synthesized. One primer is complementary to one DNA template strand at one end of the target region, and the other primer is complementary to another DNA template strand at the other end of the target region. As a starting point for nucleotide polymerization, nucleic acid polymerase can start to synthesize new nucleic acid strand from its 3' ends. Primers designed in vitro are widely used in polymerase chain reaction, sequencing, and probe synthesis.

The Type of Primer

The Design of Primer

The primers used in the polymerase chain reaction (PCR) are two synthetic oligonucleotide sequences, which are complementary to the two DNA template strands after the target gene is cleaved. In PCR (polymerase chain reaction), the nucleotide sequence of the target gene is known, and we can synthesize primers based on this sequence.

The purpose of PCR primer design is to find a suitable pair of nucleotide fragments, which can effectively amplify the template DNA sequence. The quality of primers is directly related to the success of PCR. Therefore, the design of primers must follow certain principles.

There are three basic principles for primer design: first, the sequence of the primer and the template must be closely complementary; second, avoid the formation of a stable dimer or hairpin structure between the primer and the primer; third, the primer cannot trigger a DNA polymerization reaction at a non-target site of the template (mismatch). To achieve these 3 basic principles, many factors need to be considered, such as primer length, melting temperature, internal stability of the primer and template to form a double strand, the energy value of forming primer dimer and duplex formation and hairpin, the initiation efficiency at the false priming site, the GC content of primers and products (composition), and many more. If necessary, primers need to be modified, such as adding restriction enzyme sites and introducing mutations.

Primer length is usually 18-27 bp, and cannot exceed 38 bp, because the length of the primer is too long to cause the extension temperature to be higher than 74℃, which is not suitable for Taq DNA polymerase reaction.

The Tm value of the template position sequence corresponding to the primer is about 72℃, which can optimize the renaturation conditions. There are various methods for calculating the Tm value, such as the formula Tm = 4 (G + C) +2 (A + T).

The primer should not have a complementary sequence to avoid the primer itself folding into a hairpin structure. This secondary structure can affect the renaturation of primers and templates due to steric hindrance. So the primer cannot be complementary for 4 consecutive bases. 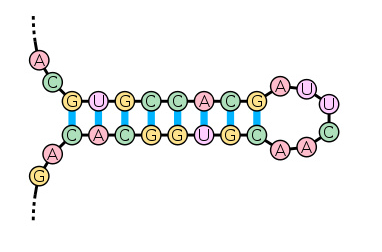 Fig. 2 The hairpin structure of DNA.

The 5′ End Can Be Modified

The 5' end of the primer determines the length of the PCR product, which has little effect on the specificity of the amplification. Therefore, it can be modified without affecting the specificity of the amplification. Modification of the 5′ end of the primer includes: adding an enzyme digestion site, introducing a protein-binding DNA sequence, introducing a promoter sequence, and the like. Primer extension starts at the 3' end and cannot be modified in any way. The 3' end should not be able to form any secondary structure.

It is worth noting that primer design is diffierent for various templates. Some templates have difficult conditions. For example, the GC content is too high or too low, which makes it impossible to find primers that are suitable for various indicators. The PCR used for cloning purposes has relatively fixed product sequences, and the choice of primer design is relatively free low. In this case, you should try to meet the conditions.