What Is Nested PCR?

Nested polymerase chain reaction (Nested PCR) is a kind of polymerase chain reaction which reduce non-specific binding in products with the help of the two sets of primer (Fig. 1). Any additional reagent, chemical or instrumentation besides conventional PCR reactions is not required. Nested PCR uses perform two round of PCR with two sets of primers. The products of second round of PCR are the target gene fragments. It generally applied to animals, such as virus, Treponema pallidum, HIV, tumor genes and so on.

Fig. 1  Set up of outer primers and nested inner primers.

It should be noted that we need to pay attention to the ratio of primers for two rounds of amplification: if the first primer is excessive, the remaining primers will also have a certain yield during the second PCR amplification, which is non-specific for the second round PCR reaction product. In the first round PCR, we should try to find out the lowest amount of primers, increase the number of cycles, and use up the remaining primers in the system. 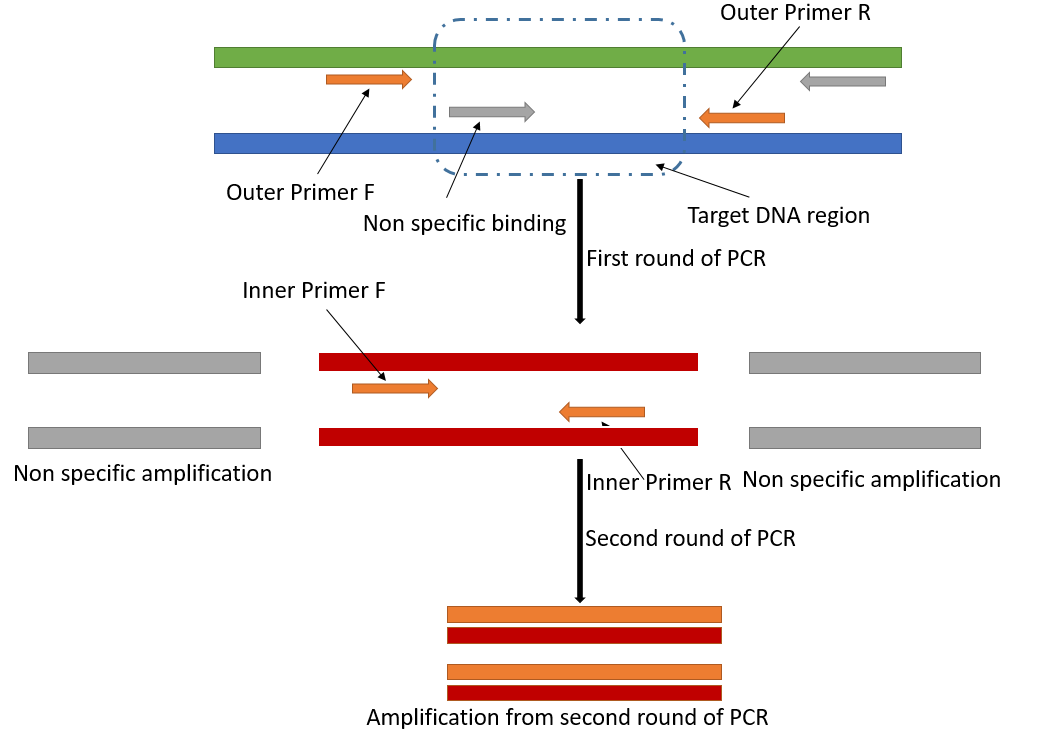 Advantages and Disadvantages of Nested PCR

Nested PCR is very useful in studies such as phylogenetic analysis and genetic polymorphism. More importantly, it gives 100% accuracy, specificity and sensitivity. For the impossible templates where the GC content might be high or chance of non-specific binding is higher, nested PCR offers the best results. It is also useful in the amplification of genes with the low abundance. Further, nested PCR is the best choice for carcinoma and viral infection studies. However, it has some limitations. This method is time-consuming compared with conventional PCR since it involves two round of PCR. Also, nested PCR requires more reagents such as an extra set of primer and one extra round of agarose gel electrophoresis, which means the method cost more. The possibility of contamination is also higher in nested PCR.

Some Subtypes of Nested PCR

Consensus nested PCR: Also known as consensus primer nested PCR. Degenerate primers are designed based on the more conserved sequences in the same genus. Usually, the first round of PCR primers has more degenerate bases than the second round, and the amplification length is 200-300bp. For certain organisms, it is a simple and easy detection method to obtain the target sequence by using consensus nested PCR amplification, and then to obtain information about unknown organisms by sequencing.