Fidelity of a DNA Polymerase

In the application of cloning, site directed mutation, sequencing template preparation and gene variability research, it is very important to maintain the accuracy of DNA sequence in PCR amplification. The ability of DNA polymerases to replicate DNA templates accurately is called fidelity. In the process of DNA synthesis, some polymerases can read and copy the sequence more accurately and preferentially to combine the correct nucleotide, so that they can integrate the correct nucleotide faster than other polymerases. In addition, DNA polymerases may also have correction activity or exonulease activity with 3'- 5' primers. When an incorrect base is added, the polymerase will recognize the error, and the wrong nucleotide will be removed and replaced with the correct one. The synthesis of the new DNA strand can then resume. Error probability is often used as an indicator to compare the fidelity of different DNA polymerases. When the mismatch ratio of nucleotide incorporation is more than 1 / 1000, it is a low fidelity DNA polymerase. When the mismatch rate is less than 1 / 100 0000, it is high fidelity DNA polymerase. Fidelity is usually expressed as a value relative to Taq DNA polymerase. Based on this comparison method, the second generation sequencing method can be used to determine the fidelity of different DNA polymerases. 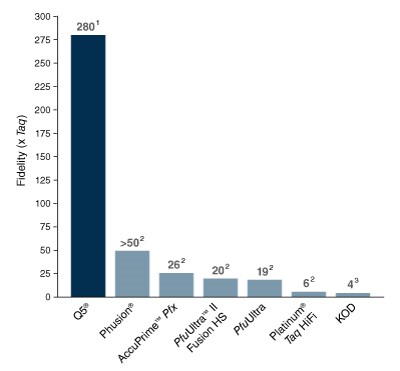 What is High Fidelity PCR?

High-fidelity PCR is a modification of conventional PCR which utilizes a DNA polymerase with a low error rate and results in a high degree of accuracy in the replication of the DNA of interest. Many high fidelity polymerases like Platinum SuperFi, Pfu, Vent DNA Polymerase have been discovered. They have different processivity, speed and levels of accuracy. The new generation of high fidelity enzymes for PCR amplification of DNA has become commercially available. It has been shown that Phusion High Fidelity DNA Polymerase when used for DNA synthesis has dramatically lower error rates compared to Taq and Pfu (Fig.1). Some research showed that Q5 is approximately 200X more faithful at replicating DNA than Taq, but results from Sanger sequencing showed that this value may actually be an underestimate. KOD is also an enzyme used in PCR experiments. Compared with Taq, it has low mismatch rate and high accuracy. It is very suitable for long fragment cloning. At the same time, because it is a hot start enzyme, it does not need ice bath to configure the reaction system. 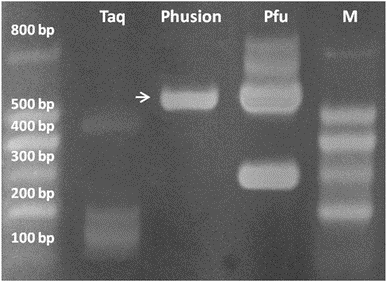 Fig. 2 Analysis of OE-PCR performance of three polymerases Taq, Phusion and Pfu using gel electrophoresis. DNA fragment corresponding to a full-sized Fel d 4 gene (581 bp) was synthesized by one-step PCR. Pfu polymerase gave clearly visible band about 581 bp (as was anticipated) but there was a number of smeary diffuse bands above and one extra 300 bp band. Phusion polymerase produced one pure band, corresponding to the PCR-product of the correct size. (Dolgova S, et al, 2017)

How to Determine the Fidelity of Polymerase?

Many polymerase fidelity assays have been described over the years, most famous method is called Kunkel. The Kunkel method uses portions of the lacZα gene in M13 bacteriophage to correlate host bacterial colony color changes with errors in DNA synthesis. Another method is established by Wayne Barnes. This assay utilized PCR to copy the entire lacZ gene and portions of two drug resistance genes with subsequent ligation, cloning, transformation and blue/white colony color determination. In both assays, errors incorporated in the lacZ gene cause a disruption in β-galactosidase activity leading to a white colony phenotype.  In order to accurately compare the fidelity of different polymerases, we must use the same processing method to determine under the same reaction conditions. Different methods may lead to different results. Suppose you want to do a cloning experiment. A 1000 bp fragment was amplified by 25 cycles in the construction of PCR. If Taq DNA polymerase and specific PCR conditions are used, more than half of the clones are expected to contain a mismatch. Using proper DNA polymerase could make less mismatches and help to reduce the number of clones that need to be screened. To maintain the highest fidelity of polymerase, we should use high fidelity reactive enzyme and optimized reaction buffer. Any additives should be avoided. Using fresh and high quality dNTPs may also help to keep the high fidelity of polymerase. Other methods like limiting the number of cycles according to the minimum demand is also widely used.