RT-PCR (Reverse Transcription-Polymerase Chain Reaction) is a technology that combines reverse transcription of RNA and polymerase chain amplification of cDNA. First, cDNA is synthesized from RNA by the action of reverse transcriptase, and then the cDNA is used as a template to amplify and synthesize the target fragment. RT-PCR technology is sensitive and versatile, and can be used to detect gene expression levels in cells, RNA virus content in cells, and directly clone cDNA sequences of specific genes. The RNA as a template may be total RNA, mRNA, or an RNA product transcribed in vitro. Regardless of the RNA used, make sure that the RNA is free of RNase and genomic DNA. 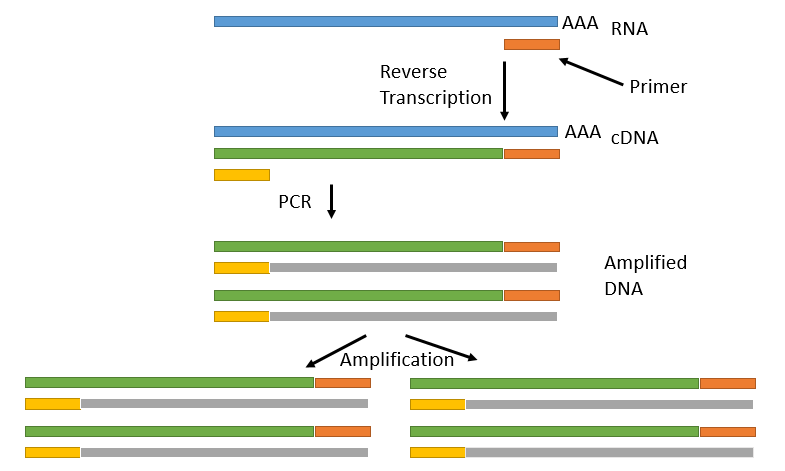 The Type of RT-PCR

The quantification of mRNA using RT-PCR can be achieved as either a one-step or a two-step reaction. The difference between the two methods is the number of test tubes used when performing the process. The two-step reaction requires the reverse transcriptase reaction and PCR amplification to be performed in separate tubes. The disadvantage of the two-step method is that it is susceptible to contamination due to more frequent sample processing. On the other hand, the entire reaction from cDNA synthesis to PCR amplification was performed in a single test tube in a single step. By including all enzymatic reactions in one environment, a one-step approach is thought to minimize experimental differences. It eliminates the need to transfer labor-intensive and easily contaminated cDNA products into a PCR reaction. The further use of a tolerant inhibitor polymerase (polymerase enhancer) with optimized one-step RT-PCR conditions supports reverse transcription of RNA from unpurified or crude samples such as whole blood and serum. However, the starting RNA template is easily degraded in a one-step method. This method is not recommended when repeated measurements of the same sample are required. In addition, it is reported that the single-step method is less accurate than the two-step method. It is also the preferred method of analysis when using DNA-binding dyes, such as SYBR Green, because primer dimers can be eliminated by simply changing the melting temperature. However, the one-step method is a relatively convenient solution for rapid detection of target RNA directly in biosensing. 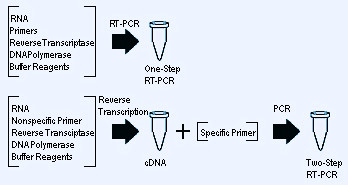 The measurement approaches of end-point RT-PCR requires the detection of gene expression levels by the use of fluorescent dyes like ethidium bromide, P32 labeling of PCR products using phosphorimager, or by scintillation counting. Endpoint RT-PCR is achieved by three different methods of relative, competition and comparison.

In the past few years, real-time RT-PCR has been widely used for gene expression analysis. Today, real-time RT-PCR is not only the method of choice for quantifying gene expression, but also the method of obtaining results from array analysis and gene expression worldwide. Currently, there are four different fluorescent DNA probes available for real-time detection of PCR products: SYBR Green, TaqMan, Molecular Beacons, and Scorpion. All of these probes can detect PCR products by generating a fluorescent signal. SYBR Green dye only emits a fluorescent signal when it binds to double-stranded DNA in solution, while the fluorescence produced by TaqMan probes, molecular beacons and scorpions depend on Förster Resonance Energy Transfer (FRET) coupling of the dye molecule and a quencher moiety to the oligonucleotide substrates.

Fig. 3 Real-time PCR chemistries. A: SYBR green I fluoresces (absorbing light of 480-nm wavelength and emitting light of 520-nm wavelength) when associated with dsDNA. B: other detection formats often utilize compatible fluorphores. Shown in this example is the Taqman probe, which contains a reporter fluorophore (R) that emits at a wavelength absorbed by the quencher fluorophore (Q). During PCR amplification, the DNA polymerase (Taq) cleaves the probe, thus liberating the reporter from the quencher and allowing for measurable fluorescence.