Polymerase chain reaction (PCR) is a method widely used in molecular biology to make many copies of a specific DNA or RNA segment. PCR is a revolutionary method developed by Kary Mullis in the 1980s. PCR is based on the ability of DNA polymerase to synthesize new strand of DNA complementary to the offered template strand. Polymerase means an enzyme that makes polymers of any other molecule which in this technique is DNA or RNA. Chain reaction is a type of reaction which progresses in an exponential way or simply, if the first reaction produces two molecules, the second reaction will make four and the third will make 16 copies, and then 32, 64, 128, 512 copies and so on. So in a matter of just a few hundred reactions, billions of copies of a single fragment of DNA or RNA can be produced. 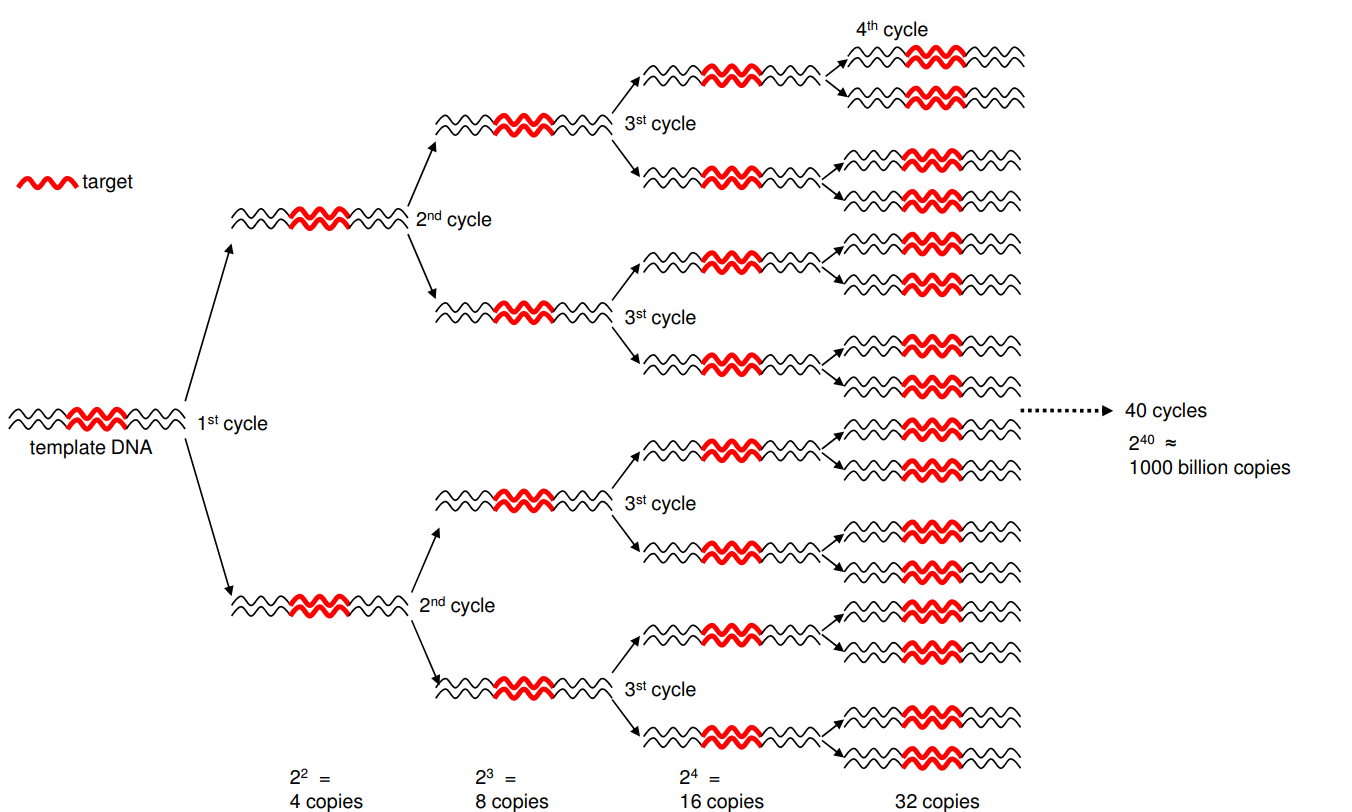 How the PCR Takes Place?

The most commonly used equipment to perform PCR is the thermal cycler, which also called PCR machine. There are small tubes in PCR machine in which all the chemicals are inserted and the reaction takes place. Four key ingredients that should be put into these tubes are Taq polymerase, primers, DNA templates and the nucleotides.  Taq polymerase is a type of DNA polymerase that uses existing strands as templates to amplify the DNA. DNA polymerase needs primers to start the reaction as the polymerase can't initiate this reaction but can only propagate it. PCR primers are short sequences of nucleotides, usually about 20 nucleotides in length that provide a starting point for DNA synthesis. DNA template is the segment of original DNA which we want to amplify and nucleotides are the basic building blocks used for DNA synthesis.

The process of PCR involves three main steps: denaturing, annealing, and extending. In denaturation, we raise the temperature of the machine to 95 ℃ to denature or separate the two strands of DNA and as a result, two separate strands of DNA are obtained. This usually takes between 15-30 seconds. Annealing is the step where we cool the temperature of the machine to 55 ℃ so that the primers in the PCR tube can bind to their target sequence on the single-stranded DNA. This step usually takes about 10-30 seconds. In extension, free nucleotides are required which used to make the new DNA. For extension, we increase the temperature to 72 ℃ so that the Taq polymerase extends the primers, synthesizing new strands of DNA. Here the Taq polymerase add new nucleotides to the short sequence of the primer to form new strands of DNA which is complementary to the original stand. These ingredients are assembled in tube along with cofactors needed by the enzyme and are put through repeated cycles of heating and cooling that allows new DNA to be synthesized.

As a result of this single cycle of heating and cooling and then heating again. Two new double stranded DNAs are obtained from one DNA fragment. One of them is the original parent DNA and the other is a new DNA formed by the Taq polymerase. This process is repeated again and again, which makes the PCR a chain reaction.

PCR has many applications such as diagnosing infectious diseases, crime investigations and genetic research and molecular biology. To diagnose infections by viruses, we can take the blood sample of a patient who has been infected by the virus. The blood of patient contains the virus and there is its genetic material (the DNA). However, the amount of DNA in the sample is a very low quantity so amplification is needed. We can perform PCR on it to amplify and then detect it.  After amplification of the DNA of virus, we could study which type of virus it is and its properties. Similar processes applied in its other uses.

PCR is also used in food science to guarantee added value products as well as to minimize the risk of infection for the consumers. Real time PCR has been utilized in food diagnostics as it provides rapid, reliable and quantitative results. Several methods such as unspecific detection independent of the target sequence using fluorescent dyes (SYBR Green) and sequence-specific fluorescent oligonucleotide probes (TaqMan probes or molecular beacons) have been used.